I grew up less than half a mile from Surrey Street and passed it every day when I was attending junior school about the same distance the other side of United’s home. When we moved as I headed towards my teenage years, the local non-league club changed to Stalybridge Celtic. I have never seen these 2 teams play each other, so following the postponement of Atherton LR v. Ashton Town this became my game of choice.

Arriving at Hurst Cross just in time, a queue at the one turnstile open, music playing to welcome the sides out, we just made it through as the game got underway. After a fairly quiet start the Nathan Valentine show of the Good, the Bad and the Ugly got started, and to be fair to Nathan it did it all in order. A fair strike put his side 1-0 up in the 12th minute when the ball broke to him on the edge of the box.

The bad came early in the second half with a ridiculous fall to the ground after his leg was caught for a foul. It angered United’s Tomsett and it looked like things would escalate, which they did in the 65th minute when for some reason with a United player down and the ball with him Valentine ran at him and tried to leather it at him. For me a red. Tomsett reacted and pushed Valentine in the back, queue throwing himself to the floor. Yellow for me but could have been red. Both were cautioned.

We also had a second for Celtic, Scott Bakkor profiting from great work by winger Osei, and a late penalty consolation for the hosts tucked away by forward turned defender Wilson.

It was ok. Valentine certainly livened it up. Enough that I might head over to Bower Fold for the league game on New Years Day.

Moment of the Match: United’s manager Banim bringing himself on in the second half. Need an even bigger shirt sir if you plan to do it again. 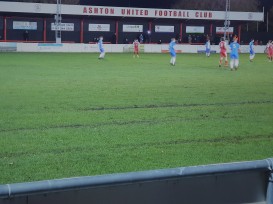 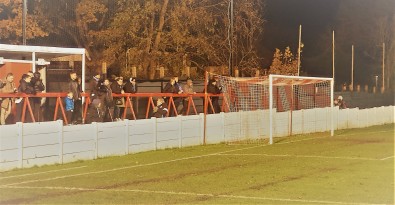