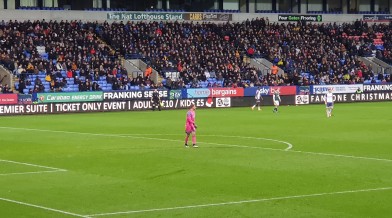 The romance of the cup. Does it ever sound more romantic that a tie of ‘Wanderers v Argyle’? It sounds like the early days of the FA Cup. It sounds like the kind of tie that brings mystique, romance and memories. So, on a very cold and occasionally wet I set off from my warm and cosy home to head off to Bolton for this tie.

The train from Manchester drops me within a short stroll of the now named ‘The University of Bolton Stadium’ home of Bolton Wanderers. Bolton’s recent problems have been well documented and hopefully the worst days are behind this club which has such a rich history, especially in this competition.

Their opponents Plymouth, whilst not having the history of Bolton in terms of success, have had their moments, a semi-final in the 1980’s losing to Watford and a set of fans I think most other fans admire for the amount of travelling and commitment they show for any away game, until Torquay return to the Football League, their nearest opponents are nearly an hour’s drive away. Nearest! Today’s trip was just shy of 300 miles one way.

I found my seat, #13, next to #4, a little strange. This once proud home is in need of those who came in the recent good times to come back again.

This tie was decided after 10 minutes when McFadzean struck a firm effort into the roof of the net following a neat Argyle move. The goal came as Bolton were looking the better side and continued a pattern that was to last most of the afternoon. Wanderers having most of the ball, looking to create and for the most part failing, Argyle putting some neat passes together to stretch the hosts defence and looking the more likely to actually add to the scoreline.

Whilst I am sure it is coming together, it was clear that this Bolton side is in its infancy and players are still getting to know each other. It will come. Argyle can cause sides a lot higher than them in the league problems on their day. I will try and get to see them again soon.

As this cold old man left for home, I was glad that I didn’t have 300 miles to go before I was in my front door, hat off to you Argyle fans.

Moment of the Match: A half-time penalty taken for a music video, no idea who’s, but on the first attempt the lad put it wide in his immaculate Bolton kit. Summed up their day really. 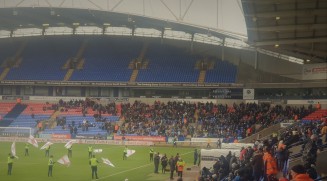 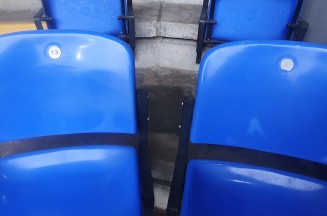 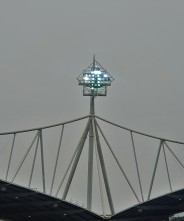